The Kent and Medway Armed Forces Network (KMAFN) is a multi-organisational group which includes members from the NHS, MoD, Armed Forces Reservists, Mental and Physical Health Clinicians, the Royal British Legion, SSAFA and other interested charities and organisations from across Kent and Medway (i.e. police and local authorities).

The members work together to improve the lives of the armed forces community. The network will also include champions from a wide range of the organisations across Kent and Medway who are advocates for the armed forces community and have the skills and knowledge to support through direct service provision, linking with other organisations or signposting to where additional support could be received. It is managed by the Armed Forces Director on behalf of both Sussex and Kent and Medway CCGs. It has a GP from West Kent CCG as the Chair of the Network. Its aim is to facilitate the CCGs and community in the delivery of the Armed Forces Covenant Commitment. 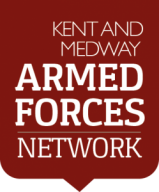